Is your name Whitaker?

If so, you may spring from one of the oldest families in Lancashire, whose name is delivered from High Whitaker, near Padiham, of from Whittaker, near Rochdale. The name has been spelt with one or twi 'T's and at the end of the thirteenth century was spelt Quitacre.

John de Quitacre came from High Whitaker to live at Simonstone in 1311 and was succeeded by his son Roger who was living in 1326. Richard de Whitaker, probably son of Roger, was living at Simonstone in 1333. The family continued to live at Simonstone Hall and Richard Whitaker and his wife Margaret were in occupation in 1434. Their son Thomas died in 1448, and in the reign of Henry VII the owner was Myles Whitaker. He had two sons, Lawrence and Henry, the former dying in 1515. Henry's son was Thomas, who lived during the time of Queen Elizabeth, and who was followed by his son Myles, who died in 1600. Next in line of succession was Thonas, who refused a knighthood from Charles I and had to pay £10 as fine. Even so the Whitakers were Royalists and two members of the family were imprisoned in Clitheroe Castle and their property confiscated by Parliament. During the Commonwealth period, John and Lawrence were at Simonstone Hall and are mentioned in 1650 and 1657, and in 1686 Miles Whitaker was outbailiff of Clitheroe, dying in 1705. The family estates included lands in Huncoat, near Accrington, when Charles Whitaker died at Somonstone in 1843.

A branch of the family lived at Holme, near Burnley, and descended from Richard, who settled there in the fourteenth century. Thomas Whitaker, of Holme, was living in 1431, and was followed by Robert, and then his son Thomas, who spelt his name Quitacre. Two generations later Thomas Whitaker, born in 1504, married Elizabeth Nowell, whose brother was Alexander Nowell, Dean of St. Paul's. Their third son was William, who became Doctor of Divinity and Master of St. John's College, Cambridge. William's eldest brother Robert inherited Holme, and was succeeded by his son Thomas. Two generations later Thomas of Holme married Judith, daughter of James Whitaker of Broadclough, another branch of the family. The outstanding member of this family was Dr. Thomas Dunham Whitaker, LL.D., Vicar of Whalley and a very well-known historian, born in 1759.

Another branch of the family, from High Whitaker, was living at Henthorn, near Clitheroe, in 1509, when James Whitaker had two sons, Henry and James. James was succeeded by his son Nicholas, who was followed by John, whose wife was Elizabeth, daughter of John Baskerfelde, of Clitheroe, and who died in 1585.

There were numerous branches of the Whitaker family in the Burnley district and it is likely that they were from the same stock.

The Whittakers of Whittaker, near Rochdale, were found there in the fifteenth century when Cornwallis Whittaker married the heiress of the Cradock family. Their son Richard had a son, Thomas, who married the heiress of the Taylor family. The family registered their pedigree in 1567 at the visitation of the heralds and now widespread in Lancashire. Both parent families used the same arms. 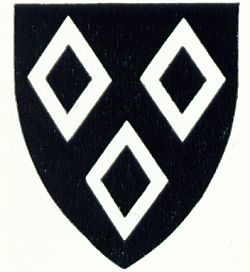