Is your name Worthington?

If so, your ancestors may have lived in a township of this name near Wigan in the 13th century.

Thomas de Worthington made grants of land to Cockersands Abbey, and in 1276 Hugh de Longworth granted lands in Longworth to William de Worthington, who held the manor of Worthington. The early descents of the family are difficult to trace, but it appears that William had a son, Hugh, who had a grant of land in Rivington about 1300. From about 1288 Hugh de Worthington rendered a pair of spurs annually for having rights of common in Standish. He married Denise, widow of Richard Halsall, about 1279. Hugh, probably son of Hugh, held lands in 1355, which his ancestor William formally held, and about 1377 Nicholas de Worthington was in trouble for cutting down trees and breaking closes at Horwich.

Hugh was followed by his son William, who married Jane Norris of Speke. Their son Richard married Agnes, daughter of Holcroft of Holcroft and Little Bolton, who is described as a widow in 1554. Three generations later Thomas Worthington of Worthington entered his pedigree in 1613, and his son William had to pay £10 for refusing a knighthood in 1631.

A branch of the Worthingtons settled at Blainscough, being descended from a younger son of the Worthington stock. A notable member of this family was Thomas Worthington, born in 1548. He was educated at Douay and became president of the college. He was sent to England to prepare for the Spanish invasion armada. Early on a February morning in 1684 the sheriff's officers raided Sankey House, Warrington, where Worthington was thought to be hiding. His nephews were captured, but Worthington had left to attend a sick man in the town and thus escaped. He was later captured and imprisoned in the Tower. In spite of his being a Papist priest, influence was brought to bear, his life was spared but he was banished. He died in 1626.

In the 15th century a branch of the family was living at Crawshaw in Adlington. In 1444 Christopher Worthington was responsible for a pardon being granted to James Nowell who had been outlawed. About 1600 James Worthington, second son of Lawrence of Crawshaw, married Anne, heiress of Roger Pendlebury of Smithill and acquired considerable estates. He paid subsidy as a landowner in 1622. Ralph, their eldest son, was a Presbyterian.

Another family of Worthingtons settled at Shevington in Standish and entered their pedigree in 1664. 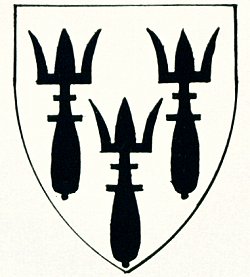