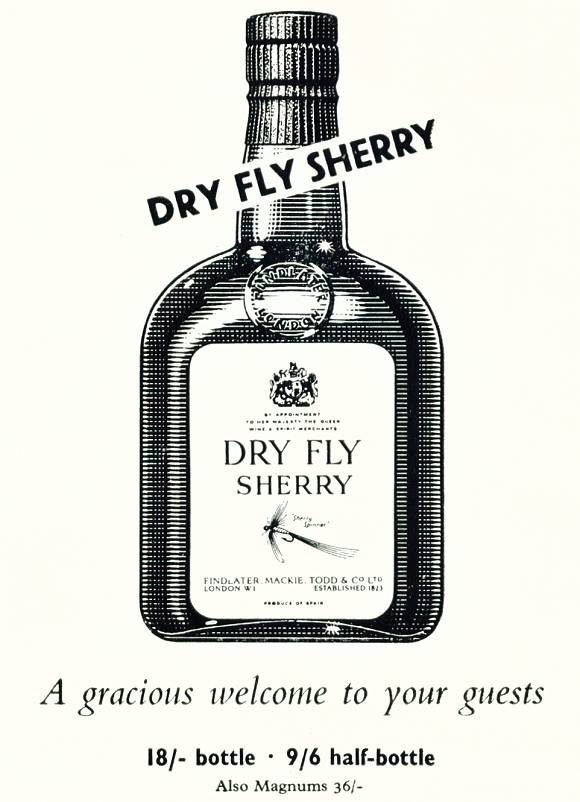 I have just inherited a bottle of Findlaters Dry Fly. Can anyone tell me anything about it. Is it worth hanging onto or selling?

Anyone remember the amusing campaign for this sherry that ran in the mid-1960s? The ads consisted of an image of somebody desiring a drink, with a short rhyming caption. One was of a man holding a hammer; the caption read "DIY? - Dry Fly!"
So many people wrote in with their own suggestions, Findlater's decided to make a competition of it. The winning entry showed a burglar sneaking out the window, joyfully grasping a bottle, with the caption "Other's buy? - Dry Fly!"

I would be interested if you still have available.

Have 20 bottles of this Sherry if anybody is interested.

It is a beautiful sherry. I was born in 1959 and would love to know where this can be purchased

Hi I have inherited a bottle of that same sherry.. sealed and uopened. i believe it to be the 1959 bottle as shown above.
If anyone is interested email me please.

All the best lee.

Has anyone located a source for Dry Fly Sherry?
It is AMBROSIA!!!
If so please contact me.

My father always drank Dry Fly and it was still available a couple of years ago although the square bottle has been replaced by an ordinary round one. Am trying to track it down

Can you still buy this sherry?